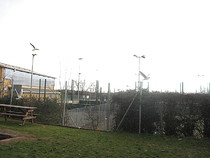 The John Warner Academy, Hoddesdon near Enfield had suffered an infestation of seagulls and large numbers of gulls were creating problems by frequenting the site to feed.

The problem seagulls had established a routine feeding pattern and associated break times at the Academy with the availability of food creating a health and safety hazard for Academy staff and the pupils.

There had even been instances where staff and pupils had been ‘attacked’ by aggressive gulls to the extent that pupils have had to take cover and run between buildings causing considerable distress.

The health and safety risk does not stop there. High levels of gull activity causes significant fouling resulting in the possible transfer of disease and creation of slip hazards from guano deposited

Solution
Peter Bush was asked to provide a solution to deter the seagulls from the Academy. After a comprehensive site survey, risk assessment and consultation with the Academy a proposal was formulated to achieve a cost effective and ethical solution.

The objective was to change the feeding pattern of the gulls by encouraging them to find an alternative area to feed.

The Seagull Deterrent Solution
There are various seagull control devices available but the final solution consisted of a falconry program using ‘live’ birds of prey which are often used as a deterrent for seagull control in urban areas.

Regular visits to the Academy, flying ‘Amber’, a female Harris hawk around break times, established the site as an unsafe area for the gulls to feed.

The program consisted of an intensive period, followed by regular management visits to maintain the presence of the hawk and establish the area as being the hawk’s territory.

Hawk Kite
A ‘Hawk kite’ was also installed on the roof of the Academy as a bird deterrent. Hawk kites can be effective when used in conjunction with a live bird of prey as the gulls are not sure if it is the real thing. Birds quickly become habituated to the kites when they are used exclusively and soon realise that they pose no real threat. But, used between falconry visits they are a useful and cost effective addition to the solution.

Working in partnership with the Academy an environmental solution was also implemented. Regular ‘litter picking’ by staff during break times helped to remove the food source, regular and responsible housekeeping can often prevent bird and pest problems from occurring in the first instance. Pupils were also encouraged to dispose of food responsibly.

Conclusion
Site management are pleased with the success of the program. A combination of the above methods has resulted in a significant reduction in the number of gulls frequenting the site.

Very few gulls are now attempting to feed on site. Falconry management visits have been reduced to one 2 hour visit per week.

"Having an increasing problem created by seagulls around our school site, I enlisted the services of Peter and his Harris Hawk “Amber” to help with this problem. Within the first few weeks an improvement was made in controlling them.

After initial curiosity from pupils about Amber, they soon settled down to let her carry out her job. I am pleased to say it has reduced the problem and that the gulls no longer arrive in large numbers. Many thanks to Peter and Amber for their help."