The Common or European mole is around 100g in weight and 150mm long with females being usually smaller than males. Its eyes are very small and hidden within its fur and ears are just small ridges in the skin. Colour of fur is mostly dark grey but can vary. Due to its underground habitat with very little light, the mole has very poor eyesight.

The mole lives in an underground tunnel system which it continually extends. The tunnels are used to capture its prey which will mainly consist of earthworms but also includes other insects such as centipedes. These burrowing insects fall into the mole's tunnel system and are quickly detected and consumed.

A mole needs to consume around a half to three quarters of its body weight each day, so its tunnel system is considerable to cater for its apetite.

The moles breeding season is March - April. Male moles leave their territory in search of females and will travel some distance over and underground. Once mating has taken place the male will leave and return to it's home or possible another vacant tunnel system. Gastation is 4-5 weeks after which a litter of 2-7 are born. The mother will feed the young until they leave to find their own territory around July.

Due to their need to tunnel, moles can create a vast amount of damage to lawns and gardens. Tunnels can be extensive and when close to the surface can cause safety issues due to the uneven surfaces e.g. humans and horses. Moles can generate many molehills which are made up of the excavated earth.

Although traps are readily available, mole control is best left to experienced pest control technicians. Mole trapping is not as easy as the trap suppliers would have you believe as moles are very sensitive to changes to their environment.

Sonic reppellers are available but their is very little evidence that these have any effect.

BPM Bird and Pest Management have years of experience trapping moles. We operate on a no catch - no fee basis and use legal and humane methods of trapping - always treating wildlife with respect. 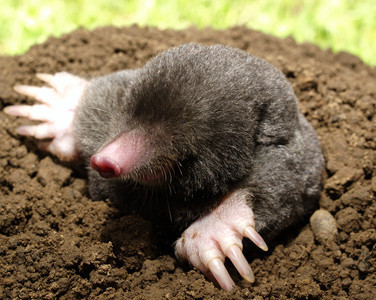